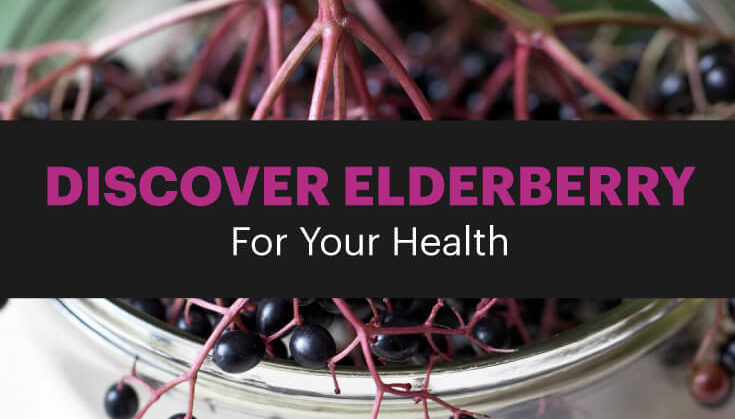 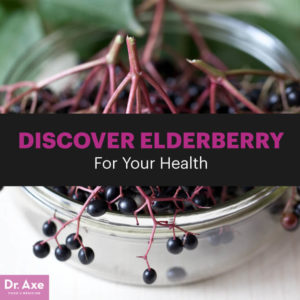 Looking for a natural remedy that has a very long history of medicinal use? There’s evidence that the elderberry may have been cultivated by prehistoric man. There are also recipes for elderberry-based medications dating back to Ancient Egypt. However, most historians typically trace its healing abilities back to Hippocrates, the ancient Greek known as the “father of medicine,” who described the plant as his “medicine chest” because of the wide array of health concerns it seemed to cure. (1) Whether we’re talking cavemen, ancient Egyptians or ancient Greeks, this natural remedy definitely goes way back, so it’s no wonder it’s known as one of the top antiviral herbson the planet.

Health benefits of the elder plant include naturally improving colds, the flu, sinus issues, nerve pain, inflammation, chronic fatigue, allergies, constipation and even cancer. (2) When used within the first 48 hours of onset of symptoms, the extract has actually been found to reduce the duration of the flu with symptoms being relieved on an average of four days earlier. (3) During the 1995 Panama flu epidemic, the government actually employed the use of the elderberry to fight the flu.

It gets better. When it comes antioxidant power, elderberry is higher in flavonoids than blueberries, cranberries, goji berries and blackberries. (4) I’m sure you’re getting the picture that this medicinal berry is a real powerhouse for good health. Let’s examine exactly why.

Elderberries are an excellent general immune system booster. The berries contain chemical compounds called anthocyanidins, which are are known to have immunostimulant effects. Elderberry extract has been shown to be a safe, efficient and cost-effective treatment for both cold and flu symptoms.

A 2016 study published in Nutrients showed that elderberry supplementation can reduce the duration and symptoms of a cold in air travelers. Travelers using this herb from 10 days before travel until four to five days after arriving overseas experienced on average a two-day shorter duration of their colds and also a noticeable reduction in cold symptoms. (5)

Several studies have demonstrated that elder extract is highly effective in mitigating flu-like symptoms. Specifically, the flavonoids in the elderberry extract bind to the H1N1 human influenza virus as well as the H5N1 avian influenza virus. A 2009 study randomized patients into two groups: One group was given four doses of 175-milligram proprietary elderberry extract daily, and the other group received a placebo daily for two days. The extract-treated group showed significant improvement in most flu symptoms while the placebo group showed no improvement or an increase in severity of symptoms. Researchers conclude that the extract is effective in controlling influenza symptoms. (6)

Another study published in the Journal of International Medical Researchshowed that when the extract is used within the first 48 hours of the onset of flu symptoms, it shortens the duration of flu symptoms by an average of four days. (7)

With elderberry’s anti-inflammatory and antioxidant properties, it makes sense that it can help sinus issues. A sinus infection is a condition in which the cavities around the nasal passages become inflamed, and this antiviral herb has promise as a sinus infection natural remedy.

A study conducted by the Institute of Complementary Medicine’s Department of Internal Medicine at the University Hospital in Zurich, Switzerland examined the use of a proprietary product, Sinupret, which contains elderberry flowers. The researchers used Sinupret to treat bacterial sinusitis along with an antibiotic (doxycycline or vibramycin) and a decongestant. People who took the combination did better compared to those who did not take Sinupret at all. (8)

Both the flower and the berry have traditionally been used to treat diabetes. Research has confirmed that extracts of elderflower stimulate glucose metabolism and the secretion of insulin, lowering blood sugar levels.

Research published in the Journal of Nutrition evaluated black elderberry’s insulin-like and insulin-releasing actions in vitro. The study found that an aqueous extract of elder significantly increased glucose transport, glucose oxidation and glycogenesis without any added insulin. (9) What is glycogenesis, and why is it important? Glycogenesis is the process by which excess sugar is cleared out of the bloodstream and into your muscles and liver, which helps maintains normal blood sugar.

Elder has been shown to promote both urination and bowel moments. Studies have indicated that elderberry or Sambucus has natural diuretic effects. (10) A diuretic is a substance that promotes the production of urine. Doctors prescribe diuretics when the body is retaining too much fluid, which is a common problem in older adults.

Elderberry may also help with constipation. A small, randomized trial looked at a compound commonly used in Brazil to treat constipation. The compound contains elderberry. The results of the study indicate that this elder-centric remedy is an effective natural laxative for the treatment of constipation. Unfortunately, there are currently no studies isolating elderberry itself for constipation relief, so more research is needed. (11)

Elderberry has made its way into cosmetic products and for good reason. Its bioflavonoids and antioxidants, along with its high vitamin A content, make it awesome for skin health. Researchers suspect that a compound found in the elderberry could give a natural boost to skin. (12)

Some herbalists put black elder flower on the list of most effective herbs used for treating hay fever-like symptoms. It can be used for allergies on its own or in combination with other herbs. Elderflower is also said to act as a detoxification aid by enhancing liver function. (13)

This study took extracts of both berries and tested them to access anticancer potential. Both extracts demonstrated significant chemopreventive potential. Additionally, the American elder extract showed inhibition of ornithine decarboxylase, which is an enzyme marker related to the promotion stage of cancer formation. (15) These findings indicate the potential as a natural cancer treatment option.

How to Use Elderberry
Elderberry can be purchased in many forms at your local health store or online.

Tea
Wine
Juice
Jelly and jams
Syrup
Ointments
Astringent
Infusions
Sprays
Lozenges
Pills
Liquid
Powder
Capsules
When it comes to colds, flu and upper respiratory issues, elderberry syrup is very popular. There are high-quality brands readily available for purchase, or you can try making your own. Try the following recipe:

Pour water into a saucepan and add elderberries, ginger and cinnamon.
Bring mixture to a boil.
Reduce heat and simmer, covered, for about 40–45 minutes or until the liquid has reduced by about half.
Remove from heat and mash the berries.
Pour through a strainer or cheesecloth into a glass bowl. If you use a cheesecloth, make sure to squeeze out the juice.
Add honey and stir until well-combined.
Bottle final product in a sterilized glass container.
Elderberry tea is another great option. You can either buy teabags or you can purchase dried berries or flowers and make a tea by combining one tablespoon of berries or flowers with eight ounces of water.

Not a fan of hot teas? Then you can try elderberry juice, which is sweet, tart and refreshing. Just watch out that you don’t purchase one that has too much added sugar.

What Is Elderberry?
Sambucus is a genus of flowering plants in the family Adoxaceae. The different species of Sambucus are commonly called elderberry or elder. The berries and flowers of the elder plant are used as medicine. Elderberry is native to Europe, Africa and parts of Asia, but it’s become common in the U.S. It has deciduous leaves, white flowers (elderflowers) and berries that turn from green to red to black when ripe. Elder is commonly found growing in woodlands and hedgerows.

The raw berries are made up of 80 percent water, 18 percent carbohydrates, and less than 1 percent each of protein and fat. Elderberries are naturally high in vitamin C, vitamin A, vitamin B6, iron and potassium, among other essential nutrients.

History of Elderberry
Historically, elderberry is known as a cure-all and has been called “the medicine chest of country people.”

The Romans created hair dye from the juice. The wood of an elderberry tree is fine-grained so it polishes easily and has been used historically to make combs, toys, skewers for butchers, pegs for shoemakers and needles for weaving musical instruments.

During the 1995 Panama flu epidemic, the government employed its use to fight the flu. The berry’s juice greatly reduced the time of the flu as well as the severity, thus helping end the epidemic.

How to consume elderberry – Dr. Axe

Elderberry Precautions and Possible Interactions
Ripe, cooked berries of most of the Sambucus species are edible. However, you should not consume raw berries or other parts of the plant since they contain a cyanide-inducing chemical. Eating uncooked berries can result in diarrhea and vomiting. Generally, commercial preparations don’t cause adverse reactions at recommended dosages.

You should not give elderberry products to a child before consulting your pediatrician. If you’re pregnant or breastfeeding, don’t take it.

If you have an autoimmune disease, such as rheumatoid arthritis, ask your doctor before taking elderberry because it may stimulate the immune system. If you have any other ongoing health concern, speak with your healthcare provider before taking it as well. People with organ transplants should not take elderberry.

Elderberry appears to have few side effects when used properly for short periods of time (up to five days).

If you currently take any of the following medications, you should talk to your healthcare provider before taking any elder plant products:

Diabetes medications
Diuretics (water pills)
Chemotherapy
Immune-suppressing drugs, including corticosteroids (prednisone), and medications used to treat autoimmune diseases
Laxatives
Theophylline (TheoDur)
Elderberry Final Thoughts
Elderberry has been shown to seriously combat the common cold as well as the flu. Science has actually shown it can shorten flu symptoms by an average of four days.
When taken properly, it typically has no negative side effects. In fact, researchers say its low cost, lack of side effects and clinical results make it an important tool for fighting flu. (16)
There are so many options when it comes to how you can consume elderberries, from juice to tea to jam.
One of the most popular ways to take elderberry, especially for a cold or flu, is a syrup, which is relatively easy to make at home.
Research is showing its potential ability to fight cancer, and hopefully more research is coming soon.
It’s also been shown to help lower blood sugar and ease allergies.
Elderberry has a pleasant berry flavor, and most people find it easy to take elder plant products.