What’s colic? If you’re a parent, whether new or seasoned, you’re well-aware, but for the rest, let’s start with a little Colic 101. Simply put, colic is unusual, prolonged fussiness or intense crying in a healthy infant. Colic usually manifests within the first month of life and resolves within 3-4 months – but those 3-4 months can seem like an eternity for parents.

Various treatment strategies have been proposed for colic, from warm baths to playing soothing music or white noise, to alterations in feeding practices. What isn’t often mentioned in the laundry list of possible ways to resolve colic are two natural options that have research to back them up: chiropractic manipulation and probiotics. 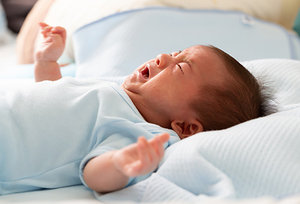 According to a research review published in BMJ Open, both interventions may be effective – and more effective than standard medication treatment – for infant colic. The review compared four different treatments (manual therapy, probiotics, proton-pump inhibitors and simethicone) and how each influenced colic symptoms, particularly crying time and sleep distress; as well as any adverse events caused by the treatment. “High-level evidence” suggests that probiotics are most effective for reducing crying time in breastfed infants. Manual therapies had moderate- to low-quality evidence for reducing crying time. According to researchers, both treatments had a low risk of adverse effects.

On the other hand, neither drug intervention fared well, stated the researchers: Studies on simethicone tended toward no benefit or a negative effect, while studies on proton-pump inhibitors “did not support their use” for reduce colic symptoms.